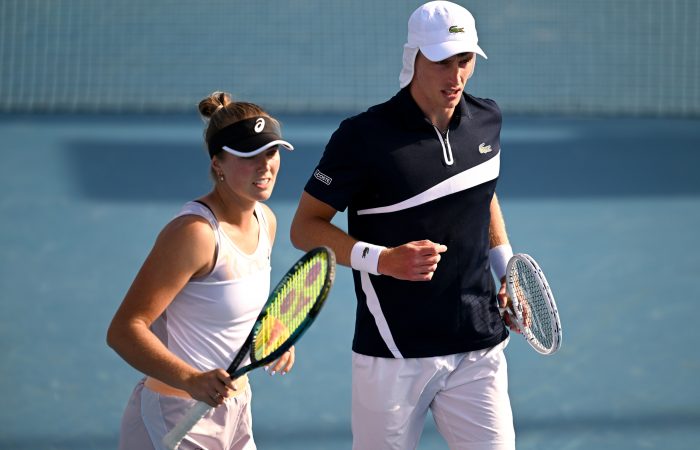 Aussie wildcards Olivia Gadecki and Marc Polmans have eliminated the No.4 seeds in the Australian Open 2023 mixed doubles competition.

The 20-year-old from the Gold Coast teamed with Melbourne local Marc Polmans to dismiss world No.23 Ena Shibahara from Japan and world No.3 Wesley Koolhof from the Netherlands in spectacular fashion at Melbourne Park this evening.

The Aussie wildcards triumphed 6-2 6-2 in 63 minutes against the No.4 seeds and reigning Roland Garros champions.

This means Gadecki has advanced to the second round in three events – singles, women’s doubles and mixed doubles.

The 28-year-old from Melbourne teamed with Andrew Harris to edge out a 4-6 7-6(6) [10-8] victory against China’s Zhang Shuai and Robin Haase of the Netherlands.

But as new stars emerged, a fan favourite bid farewell.

Fifth seeds, world No.18 Demi Schuurs of the Netherlands and world No.8 Nikola Mektic of Croatia, denied Stosur a fairytale finish in her final tournament, recording a 4-6 6-3 [10-6] victory in their first-round match.

An emotional Stosur, an eight-time Grand Slam champion, was celebrated in a special on-court ceremony after the match in front of an adoring Court 3 crowd.

“I can’t believe the journey I’ve been able to get on,” Stosur said. “From dreaming as a little kid to being able to finish here all these years later, in front of friends and family, and the Aussie fans who have supported me forever, I thank you so much.”