Aussie wildcards knock out No.4 seeds in Australian Open doubles | 21 January, 2023 | All News | News and Features | News and Events 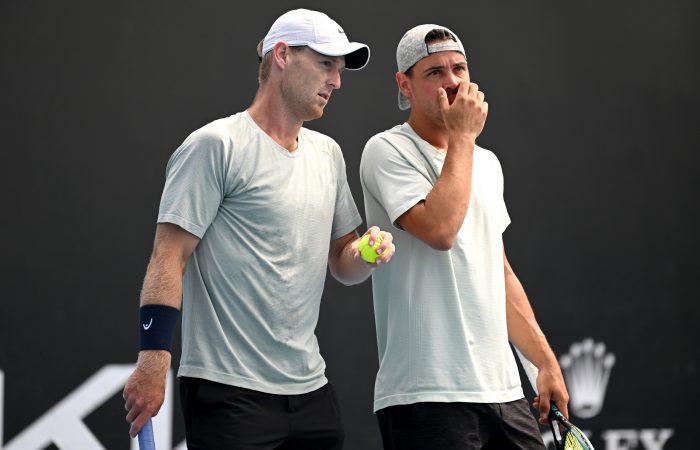 Alex Bolt and Luke Saville have scored a big win to advance to the third round in the Australian Open 2023 men’s doubles competition.

They say lightning doesn’t strike twice – but for the second year in a row, a pair of Aussie wildcards are making a giant-killing run in the Australian Open men’s doubles draw.

“Tennis can be a pretty tough slog, so to notch up a win like this on the middle Saturday at the Australian Open, with great weather and a packed Court 7, it really doesn’t get much better than this.”

World No.8 Mektic and world No.5 Pavic, the reigning Olympic champions, exited in the second round at last year’s Australian Open, as the No.1 seeds, to another pair of Aussie wildcards. Thanasi Kokkinakis and Nick Kyrgios, memorably, went on to win the title.

The Croatian combination also finished runners-up to Matt Ebden and Max Purcell at Wimbledon, and lost to Purcell and Jordan Thompson in the Davis Cup semifinals in November.

“We talked to a couple of the (Aussie) boys that have played them and they gave us a couple of tips,” revealed Bolt. “Then we just went out there and tried to execute what we wanted to do, and it came out on top for us.”

The 30-year-old Bolt is through to the Australian Open doubles third round for a fourth time – and for the first time since 2017. While for 28-year-old Saville, this is the second time he has reached this stage at his home Grand Slam.

The self-belief is growing for the childhood friends, who are teaming up at a Grand Slam for the first time. They now face the No.14 seeds, fellow Australian John Peers and his German partner Andreas Mies, who scored a straight-sets second-round win today.

“We just beat one of the most in-form pairs in the world on one of their favourite surfaces, anything is possible,” Saville said.

“We feel like we combine really well and complement each other. But most of all, we’re just enjoying it and we’ll see where that takes us.”

In women’s doubles action, Ellen Perez’s campaign ended in heart-breaking fashion. The world No.20 and her American partner Nicole Melichar-Martinez lost in…