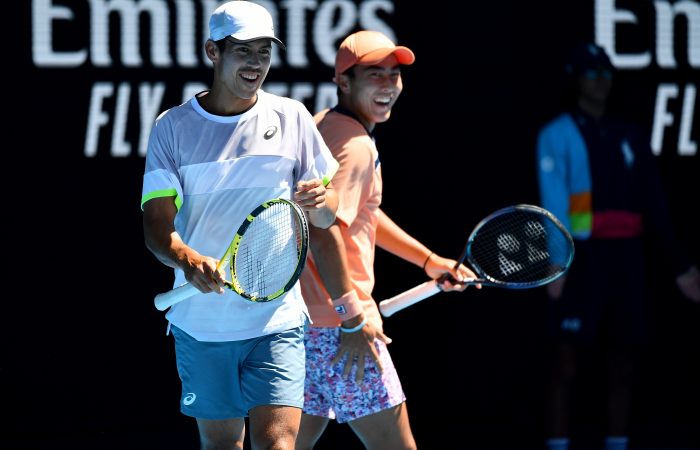 The Aussie wildcards looked in trouble when they trailed Bosnian Tomislav Brkic and Ecuador’s Gonzalo Escobar 1-6 2-4 in their third-round clash at Margaret Court Arena today.

But 29-year-old Kubler and 21-year-old Hijikata fought back, showing incredible grit to save a match point in a high-pressure second-set tiebreak.

The Rinky and Kubes show goes on 🍿

“It’s unbelievable,” Kubler said. “This is the first time we’ve played together. Hopefully we keep it going.”

The Aussie wildcards, who are both enjoying a career-best run in a Grand Slam men’s doubles draw, next meet the tournament’s top seeds, Wesley Koolhof of the Netherlands and Brit Neal Skupski.

John Peers and his German partner Andreas Mies have also progressed to the quarterfinals, sealing their spot with a comprehensive 6-0 6-3 victory against Aussie wildcards Alex Bolt and Luke Saville.

“We came out on fire today, which was good,” said world No.38 Peers. “We made them play a lot of balls and everything sort of just fell our way, which was great for us.”

The 14th seeded pair of John Peers and Andreas Mies defeat the all-Aussie duo of Luke Saville and Alex Bolt 6-0 6-3.

This is the fourth time that 34-year-old Peers, who grew up in Melbourne and was once a ballkid at the tournament, has advanced to an Australian Open men’s doubles quarterfinal.