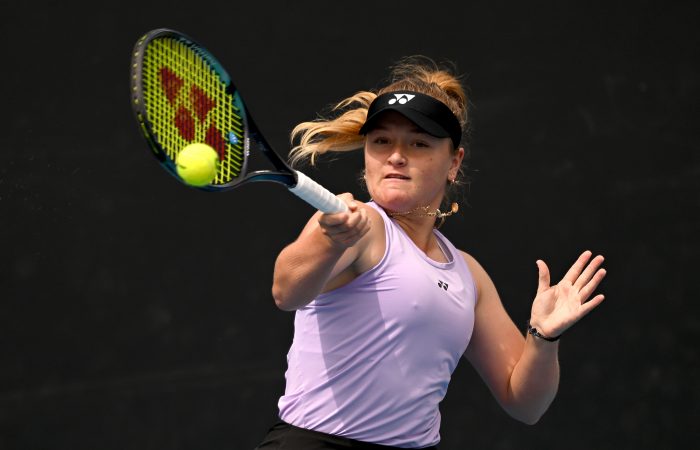 Stefani Webb has been attending the Australian Open every summer for as long as she can remember – but this year’s tournament is proving her most memorable yet.

The 17-year-old from Melbourne’s northern suburbs made her Australian Open debut in stunning fashion today, eliminating top seed Sara Saito in the girls’ singles competition in front of a packed Court 16.

“Now I know what it feels like to have a big crowd behind you and why all the pros, especially the Aussies, talk about the crowd because it’s actually a thing and it’s so good.”

Webb played a limited schedule in 2022, choosing to prioritise completing her Year 12 studies while dealing with a number of injury setbacks.

She proved she was one to watch during the 18/u Australian Championships in December, scooping the title to earn her Australian Open wildcard.

When No.187-ranked Webb learned she had drawn Saito, a 16-year-old from Japan ranked No.5 in the ITF world junior rankings, she refused to be intimidated. She researched her opponent and took a fearless mindset into their match.

“I just said, ‘look, I’m going to go out there and give it my best’. I knew the crowd would be behind me, so I just wanted to fight until the end and give them a good show,” Webb said.

“I knew it was going to be tough facing the No.1 seed, but I thought I’m the underdog here and she’s the No.1 seed and the one expected to win.”

Relishing the atmosphere at Melbourne Park, Webb closed out the biggest victory of her young career in one hour and 32 minutes.

“Playing at the Australian Open was on my bucket list, it was one of my dreams,” Webb said.

“Now I’ve done that and I’m into the second round, so I honestly have no words. I hope I can play here in the women’s one day as well.”

Webb’s dreams of turning professional are on hold for now. She has received a scholarship at the University of Central Florida, so plans to hone her game this year playing college tennis while studying…