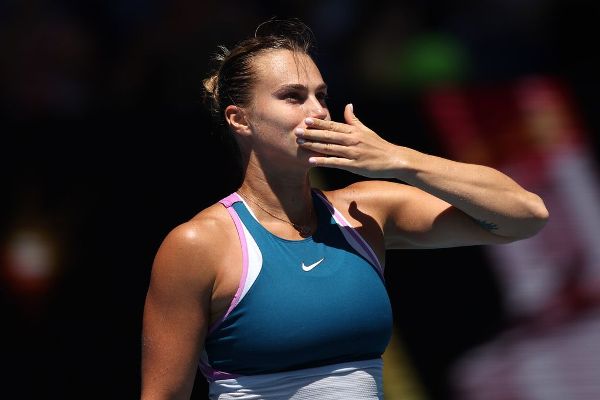 MELBOURNE, Australia — Aryna Sabalenka maintained her unbeaten start to the year when she beat Tereza Martincova 6-1, 6-4 on Tuesday to reach the second round of the Australian Open.

The fifth-seeded Sabalenka, who won the Adelaide International title in the first week of the year, hit 29 winners to her opponent’s seven as she won her fifth consecutive match.

“It wasn’t that easy, I’m super-happy to start with the win,” said Sabalenka, who will play American Shelby Rogers in the second round. “I have to work on my mindset and stay calm and not get too upset when I make mistakes. I really believe this is the only thing missing in my game.”

Sabalenka, who has yet to win a Grand Slam singles title, hasn’t made it past the fourth round at the Australian Open in five previous visits.

Caroline Garcia started her quest for a first Grand Slam singles title with a 6-3, 6-0 win over Katherine Sebov, a qualifier from Canada. The fourth-seeded player, who won the WTA Finals at the end of 2022, took just 65 minutes for victory and now plays another Canadian, former US Open runner-up Leylah Fernandez, who beat Alize Cornet 7-5, 6-2.

Garbine Muguruza, the runner-up in Melbourne in 2020, lost her fifth consecutive match to start the year when she was beaten 3-6, 6-7 (3), 6-1 by Elise Mertens. Two-time Grand Slam champion Muguruza served for the match at 6-5 in the second set.

Other winners in the women’s field included No. 9 Veronika Kudermetova and No. 16 Anett Kontaveit.

The Associated Press contributed to this report.