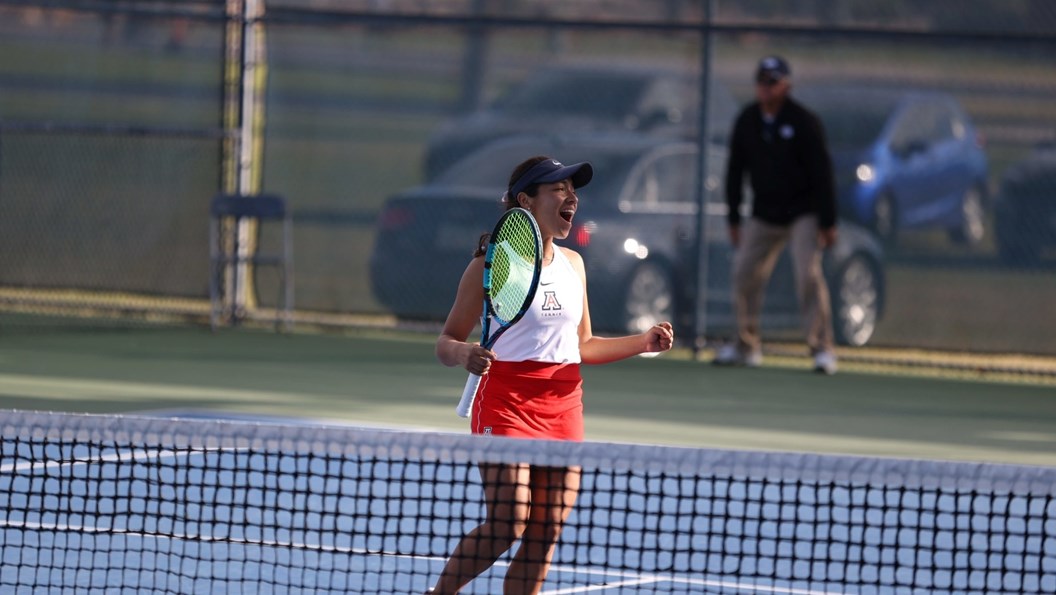 
TUCSON, Ariz. – The Wildcats went two for two today in their doubleheader against Cal Poly and GCU, taking both doubles points and a total of eight singles points. Women’s Tennis is now 3-0 in non-conference play.

The doubles point in Sunday morning’s contest between Arizona and Cal Poly came down to an intense battle on court one. Parker Fry and Salma Ziouti faced off against the sister duo Delanie and Peyton Dunkle, coming away with a 6-3 victory.

It was a quick doubles competition against GCU with both Arizona pairs finishing 6-3 on courts one and two. Kayla Wilkins and Reece Carter defeated Valentina Del Marco and Santa Strombacha first on court two then Ziouti and Midori Castillo secured the doubles point on court one.

Wilkins and Carter won both of their doubles matches together while Ziouti assisted in clinching both doubles points today alongside Fry in the morning match and then with Midori Castillo in the afternoon match.

The Wildcats only dropped one singles match to the Mustangs and won three singles matches in straight sets. Wilkins clinched the match with her 6-4, 6-0 win against P. Dunkle, and former Arizona singles state champion Tanvi Narendran took the fourth singles point of the day. She broke into three sets against Kennedy Buntrock in the No. 5 spot, winning the first 6-2 then falling 1-6 in the second before coming back 6-2 in the third.

Arizona got it done in straight sets on courts four, five and six to finalize their second win of the day against GCU. Freshman Carter, who won both of her singles matches in straight sets at the No. 4 spot, finished first taking the initial singles point against the Antelopes. Fry claimed the next point on court six and Narendran clinched on court five.

Next up for the Cats is a road trip to College Station, Texas for the ITA Kickoff where they’ll compete against No. 18 Florida in round one on Saturday, Jan. 28 at 2 p.m. MST