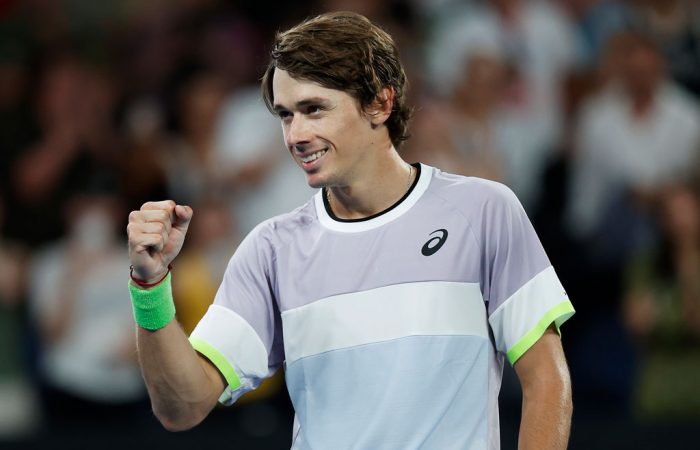 Delighted to be competing before a supportive home crowd in Melbourne, Alex de Minaur is taking a “don’t worry, be happy” approach to his AO 2023 campaign.

“Don’t worry, be happy” is a theme for Alex de Minaur in his sixth main-draw campaign at the Australian Open.

With those words written by the Australian himself on his racquet bag, the song by that same name has also become his pre-match listening choice.

As he progressed through his first-round match at Australian Open 2023 on Tuesday night, there was much for De Minaur, the No.22 men’s seed in Melbourne, to be happy about.

A brief rain delay arguably provided the biggest frustration as De Minaur completed a 6-2 6-2 6-3 victory in just over two hours.

“At the moment, I’ve got that (‘Don’t Worry, Be Happy’) song in my head at all times. I’m listening before I step out on court. I just want that message ingrained in my head,” De Minaur later explained with a smile.

“Whenever there’s a tough moment out there, I just kind of try to sing that song in my head and avoid any negative thoughts and try to stay positive.”

Not that De Minaur has appeared anything less than positive in a stunning recent stretch of his career.

The 23-year-old capped a personal-best 2022 season – which included fourth-round appearances at the Australian Open and Wimbledon, plus a sixth ATP singles title in Atlanta – by leading Australia to a runner-up finish at the Davis Cup Finals.

This year already features a significant breakthrough, De Minaur claiming a first win over Rafael Nadal at the United Cup in the four matches they’ve played.

“I knew I had that level for a while but to get these wins, it’s a different level,” said the Australian, who recovered from a first-set deficit against the prolific Spaniard.

“So now I know I can do it every week, so that’s the plan now – I’ve just got to get to play those matches and back myself.

“Have a lot of confidence, believe in myself and enjoy what I do every day.”

De Minaur will have his next opportunity to showcase his improvements in his second-round Australian Open encounter with French veteran Adrian Mannarino.

“We’ve had a couple battles. I know what’s coming. He’s a tricky…